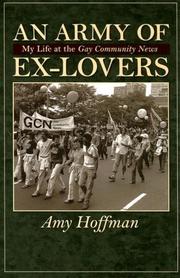 Published October 2007 by University of Massachusetts Press .
Written in English

AN ARMY OF EX-LOVERS: My Life at the Gay Community News. Amy Hoffman. Capturing the heady atmosphere of the times, Hoffman's memoir is also her personal story written with wit and insight. She talks about growing up in a political movement; of her deepening relationships with charismatic, talented, and sometimes utterly weird co-workers; and of. An Army of Ex-Lovers. An Army of Ex-Lovers is a memoir about the Boston LGBT community of the s and specifically about the experience of the author, Amy Hoffman, who worked on the staff of the Gay Community News from – , and for several years thereafter served as a board member and writer for the paper.   In An Army of Ex-Lovers, Hoffman delivers an absorbing account of a tumultuous time and illustrates what readers miss when the subject is overlooked. Along with political events, Hoffman traces her own growth through several relationships with dynamic women who were also playing leading roles in the movement for GLBT rights. An Army of Ex-Lovers, her second book, describes life at Boston’s Gay Community News, where, during the s, she worked and gathered her chosen family. Her most recent memoir, Lies About My Family, brings us back to her roots in suburban New Jersey, weaving her own story of growing up Jewish and lesbian with her birth family’s stories of immigration, enterprise, .

The Mystical Hiring Committee of Life --My Yale College and My Harvard --Cynthia, Goddess of the Moon --The First to Go --Beginnings --The Saints and Somewhere --Over the Rainbow --The Swan Princes --The Death of David Brill --An Army of Ex-Lovers --The Nude Boy Controversy --God Bless the Child --The Rage Warehouse --The Fire.   In "An Army of Ex-Lovers: My Life at the Gay Community News," former GCN editor Amy Hoffman, now editor of the Women's Review of Books, recalls with wit the heady debates that roiled the staff. Although GCN never had a circulation of more than 5,, it was a vital connection for readers coming out of the closet.   But I recently read a memoir that had me engaged all the way through: Amy Hoffman's An Army of Ex-Lovers: My Life at the Gay Community News. In her account of the community that formed around this Boston-based, small but influential publication in the late s and early s, Hoffman strikes the perfect balance between history, reflection.   Amy Hoffman. Amy Hoffman is the author of the memoirs Lies about My Family, An Army of Ex-Lovers, and Hospital Time. She teaches in the Solstice MFA Program at Pine Manor College and is editor in chief of the Women's Review of Books.